On Wednesday 10th June I was able to discuss the current state of NDIS work in AT with the relatively new General Manager, Market and Sector Division, Esther Kerr-Smith. It followed my letter to the CEO of NDIA in April .

Essentially Esther was briefed by the CEO to accelerate the NDIA AT discussion and readiness. The aim was to make sure that ‘technology is a catalyst for innovative solutions and enhanced efficiencies for NDIA assistance to participants.’ After 3 months or so getting a handle on things, talking to staff and others, Esther is now gearing up on developing an AT Strategy.

The Strategy was likely to have three parts:

Matthew Massy-Westropp was appointed through to the end of the year to bring a broader perspective with domain knowledge and is focused on developing the component parts of the strategy. A key part of this is the engagement approach – which the NDIA wants to make more focused on hearing from participants.

Aspects of these new approaches are being considered/approved for progress by the Board, and the Agency will now be increasingly opening this up to consultation/engagement. On Tuesday morning this week (16th), the NDIA had a briefing on ICT aspects for their systems. Interestingly Esther and David Bowen both made the point during the session the focus was on innovation to assist participants engage personally with the Agency, and also to catalyse new support options (think ubiquitous accesssible ICT, Smart AT etc.) for them using ICT (the webcast is likely to go online in a few days).

Sean Fitzgerald was MC for the event and, apart from my misgivings about him narrowing the definition of AT, did a great job in highlighting the opportunities and issues in ICT to a relatively mainstream audience. As this was Microsoft, Google, big & smaller ICT businesses, it put them on notice that the tenders/procurement would have a strong emphasis on solutions to empower people with disability (and involve them in the innovation & delivery aspects). It also highlighted that both Dept of Social Services (DSS) and Dept of Human Services (DHS – who are in charge of the underlying project management of the ICT build drawing on their experience in Medicare/Centrelink) were also overtly thinking about how they could more directly connect with people with disability, and not rely on carers or others as a ‘go between.’

This is probably the first ‘cab off the rank’ info sharing event, and Esther indicated to me there are other planned events/meetings in the second half of the year with AT presentations, but also including forums/meetings to develop and refine the NDIA approach to AT. The next opportunity is a Q&A session on 26 June. 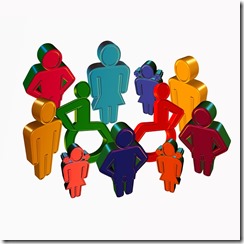 So expect more to emerge and I think yet again, we need to remember to be listening to consumers of AT and encouraging them to speak up as the Agency seeks their input.

In April I wrote to David Bowen (CEO of the NDIA) about a number of concerns I had about the path that the Agency has been taking in formulating its approach to providing AT across Australia to its participants. I also expressed dismay at the feeling that it was now stalled following the feedback to the Agency (yet to be released) on their Framework paper. You can see some of my thoughts on their draft Framework in (one of) my official capacities on the Engineers Aus  website where the NCRE submission is.

David Bowen and the NDIA team have formally responded (6 May) and the letter below (with David’s permission – published unedited) contains some interesting updates (including a note that he has allocated extra resources to the task).

I am sure many of you will join with me in offering to assist Ms Kerr-Smith and her team to reinvigourate this process and help build the world class AT system that Australians with disability (or functional limitation) deserve. As I note that David’s tenure is due to expire about now, I trust the CEO (David or a successor) will be able to continue this long standing commitment to getting AT right!

Thank you for your letter of 23 April 2015 regarding the development of a national system for the provision of Assistive Technology (AT).

As you will be aware, the National Disability Insurance Agency (NDIA) has many concurrent priorities to deliver on, including the rollout of National Disability Insurance Scheme (NDIS) trial
sites and meeting the needs of participants who are phasing into the Scheme during the trial period. I agree with and acknowledge the importance of AT within the NDIS. As such, the NDIA is progressing work on an AT strategy.
During the trial period the NDIA has been, and will continue, working closely with state based equipment schemes to deliver the AT required by trial site participants. This has meant participants have their equipment needs assessed, delivered and set up as quickly as possible to increase their ability to safely undertake daily activities and to increase participation in their community. This has already reduced long waiting periods caused by budget constrained equipment schemes and has expanded the variety of equipment available to participants.
Increasingly, AT devices available to all Australian residents are being used to meet participant needs, particularly in the area of communication technology. Working closely with state schemes has also meant knowledge that can inform the development of the NDIA’s strategy is shared.
If you are aware of any specific instances of delays in provision of AT, please provide details directly to trial site personnel or to the General Manager of Operations, Ms Liz Cairns
(liz.cairns@ndis.gov.au).

I appreciate that you and your colleagues are eager to see visible evidence of the work on AT progressing faster. Following the analysis of the responses from the ‘Towards Solutions for
Assistive Technology Discussion Paper’ the NDIA now has additional information from a wider audience to continue informing a model for delivery of AT to NDIS participants in the full Scheme. As you are aware, strong views are held in relation to all aspects of AT and decisions need to be made which will have a significant impact on NDIS participants, so the complexities must be worked through diligently.

To this end, I have increased the resources devoted to this component of the NDIA’s work. Ms Esther Kerr-Smith has been recruited to the position of General Manager of the Market and
Sector Division and is leading the work on market design, including AT. Ms Kerr-Smith’s team is growing to reflect the NDIA’s investment in these priority areas.

The focus for AT strategy incorporates, but is by no means limited to, questions about procurement. Ensuring the NDIS is  set up to promote best practice and innovation are key priorities for the NDIA in AT and across all supports.

The procurement arrangements are very important in AT as constructing the most cost efficient system for the delivery of daily use products will enable consequential savings to be invested in research and development for more innovative ways of meeting participant needs. The NDIA is comprehensively analysing the inputs and outcomes from state schemes to better construct the national direction for the full rollout of the NDIS. The next focus will be on consumer input, feedback and testing, following which the NDIA will be in a position to brief
more widely.

I appreciate and share your continuing interest and determination to see the NDIA appropriately addressing provision of AT to NDIS participants.

Thank you again for writing

The NDIA have now officially advised the AT Reference Group that the above discussion paper is out for public comment. I’d strongly encourage everyone with an interest in AT to take a look and see the ideas they are proposing. While the Reference Group had input into this paper, we don’t all agree with everything in it but it is a great place to start a broad discussion on what Australians with disability would like to see from an NDIS guided AT system.

Mary Hawkins (Branch Manager, Supports & Services) suggests that you should give your feedback by the end of February 2015.

Today Michelle (my wife) sent me details of an article from the NY Times “When Talking About Bias Backfires” by Adam Grant and Sheryl Sandberg on Discrimination at Work. It is based on a recent publication by Duguid & Thomas-Hunt in J of Applied Psychology “Condoning Stereotyping?: How Awareness of Stereotyping  Prevalence Impacts Expression of Stereotypes.” and an older one by Cialdini (2006) .

It’s perhaps not surprising that just telling people that many do the wrong thing doesn’t improve their behaviour – in fact it often makes it worse.  My comment was that we need to be careful when we assume a set of ‘typical moral standards’ because unlike the 1950s and before where the biblical mores (e.g. the 10 commandments) were the measuring stick, many today just don’t have any. It is about fitting in or being popular/famous etc. (after all it is the latter we reward). The ‘whatever it takes’ mentality isn’t a big step further from this as explained nicely by Brendan McKeague at the Qld UCA Synod. Paul Clark noted that many years ago, one of the last subjects an undergraduate studied was ethics; they were saying  ‘with all your knowledge now let us give you the key rubric/rules on what you should do with it.’  Today ethics is making a comeback, but for many it is still an elective or non existent.

With that background, the findings of the studies make perfect sense. Everyone is listening to the info to know ‘what is everyone else doing?’ not ‘what should I be doing?’   The extra line by Grant “I don’t want to see this happen again” got the desired results because it added back the moral/ethical element to counter the ‘everyone thinks this is OK.’

Whether it is the thought that assistive technology has been going along fine – so why change, or that foreign aid is discretionary spending, perhaps now is the time for us to be clear that just because others do it, or we’ve done it before, doesn’t make it right. We need to say now ‘We expect better than this.’